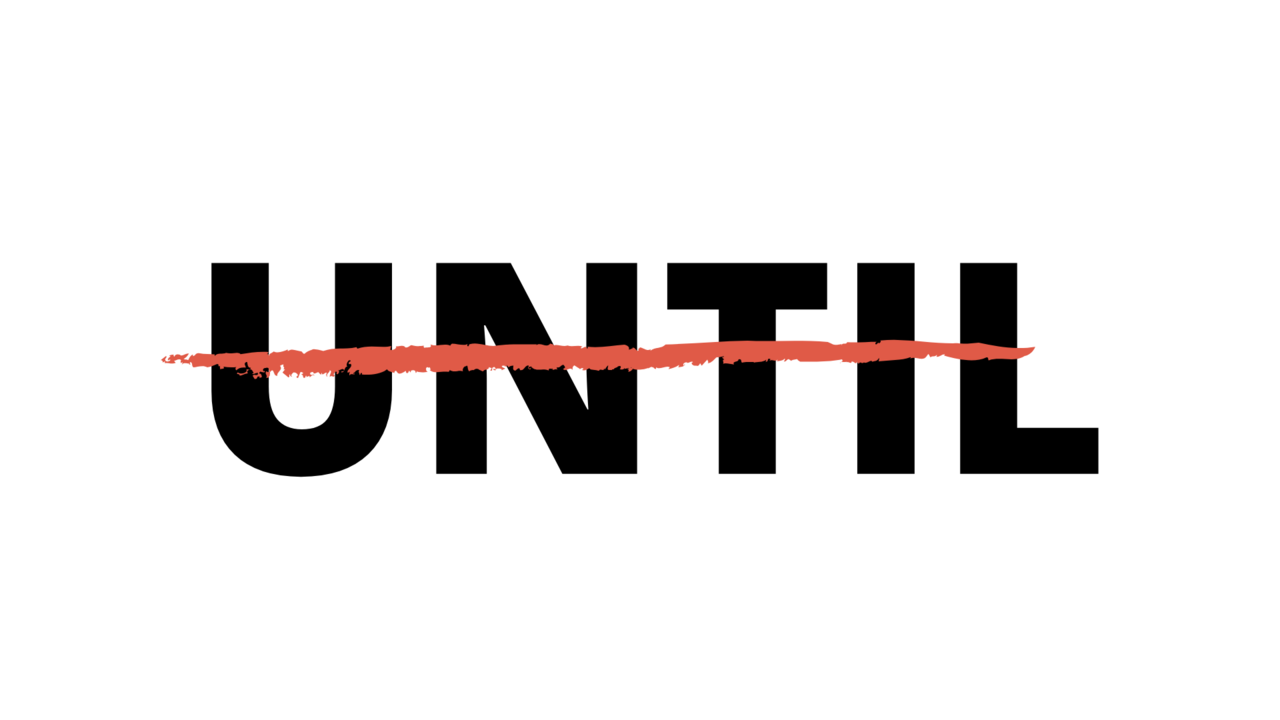 Today’s thought and realization is based upon one very simple word. Five little letters, I’m convinced, that if eliminated in one case and embraced in another, will yield tremendous success.

Well, let’s take the first case. Eliminating it. What one word have you used most in your life to excuse yourself from achievement and success? What one word has become necessary for you to feel okay with the status quo, with staying where you are? What one word has prevented you from taking full responsibility for your future, starting today, starting right now?

“I can’t get that advanced degree UNTIL my kids are a little older.”

“I can’t lose weight UNTIL l I find more time to work out.”

“I can’t work out UNTIL my ankle, knee, or shoulder (or whatever part of your body ails you–and we all have something that ails us, am I right?) gets better”

“I can’t truly relax UNTIL I make more money.”

Okay, now you fill in the blanks.

Why do we do this? And make no mistake about it, we ALL do it. To be blunt and completely honest, we do it because it lets us off the hook. I was speaking to a friend of mine in the U.K. yesterday and we were talking about the projects on which we are both working. I told him a little bit about UMC (Ultimate Muscle Confusion©), my new fitness program about which I’m extremely excited. I told him how I’d resigned from my position as a Finance Executive to pursue what I feel is my true calling- helping and motivating people, including my children with whom I now expect to spend more time. He was sharing with me his current goal, to build and share with professionals the most uniquely effective method for working with Microsoft Excel I’ve ever heard of. But he was stuck, bogged down at what he felt was an impasse in the pursuit of this goal. He’s spent months working on this product and the marketing and publicity behind it, so I knew he’d been putting in the necessary work. From what I’ve seen so far, he’s certainly done enough to release this new product at least in a test (or beta) phase.

But then I understood his reservations, because I too have that affliction. For me, the internal dialogue goes something like this:

“You can’t release your website (UMC©) UNTIL you have all the marketing done and the website is very professional looking.” I’ve done the same with this blog, telling myself over and over again that I can’t post a new blog entry UNTIL I review it “one more time.”

“You can’t finish the website and fliers UNTIL you can show your target market that you are experienced.” I’ve even done this for years, believe it or not, when buying clothes. I’m gonna buy that suit or slim-fit shirt as soon as I get ‘ripped’. (“WHEN”, by the way is the first cousin to “UNTIL”)

“You can’t show them you are experienced UNTIL you can take a photo in which you look extremely fit or get some advanced credentials that you can add to the back of your name.” The easiest ‘out’ for me has been my speech, something with which I’ve struggled my entire life. “I certainly can’t become a real role model and motivation to others UNTIL I get better at public speaking.”

This self-defeating dialogue that we all undertake is the biggest reason we fail to reach our goals. Finding excuses, after all, makes it easier to accept where we are in life. Sure, we want more. Most of us do, at least. But wanting more requires work. It requires overcoming adversity. And if we fall short, it requires that we accept full responsibility for it. With no excuses, after all, the blame is placed squarely on our shoulders. And most of us can’t accept that. Consciously or subconsciously.

So the first step is recognizing this dialogue, this internal negative self-talk. The next step is to eliminate the word UNTIL from the vocabulary of our inner voice.

But as personal improvement sages teach us, successful elimination of bad habits requires the replacement of those habits with new ones. People trying to stop smoking must replace that urge to have something in their mouth or relieve stress with something else. Overeaters must replace the need to eat with another way to gain comfort. And people who have drug and alcohol dependencies must find better, healthier ways to deal with the demons they are facing.

So, in order for the elimination of the word “until” to stick and for any change to be long-lasting, you must replace it.

But with what? With what word?

Well, you replace it with “until.” A new and improved “UNTIL.”

Once you come to grips with the fact that your success is mostly in your control and remove all of the excuses that hold you back, you can move forward. As I mentioned before, this is something we all deal with and is certainly something that is not easy. I deal with it every day. I have to remain vigilant in my fight against internal self-defeating talk every hour of every day, in fact. But I do it. I’m saying I always win. I certainly do not. But I wake up ready to Run it Back every day. And by doing so, I continually replace the bad “until’ with the more productive and helpful “until.”

Once you decide that your success is up to you and only you, you must accept that your setbacks are also up to you and only you. And outside of physical limitations—one example would be a 4 ft. tall person hoping to play professional basketball– I believe this firmly to be the case. I believe that we are capable of doing anything we want to. But to do so requires that we firmly plant this new and improved ‘until’ into the lexicon and jargon of our everyday language- both internally and externally.

It goes a little something like this, using my dialogue as an example:

I have a fear of speaking and feel like I have some mechanical issues that warrant that fear, but will work at it–speaking when possible, listening to mentors, etc.–UNTIL I am excellent. However long it takes.

I have my insecurities about my physical appearance like anyone else and too often succumb emotionally to The Bluford Principle, but I will work at it–working out, eating right, looking at myself objectively–UNTIL I am confident that where I am physically is just right. However long it takes.

Even on a personal level..

I tend to yell at my kids more than I want, but I will read every book and article I can find about parenting and put into practice any tips I deem useful UNTIL I am the parent I know I can be. However long it takes.

Okay, now you fill in the blanks.

“I am nowhere near where I want to be, but I will __Action Verbs__ UNTIL __Desired Outcome__.”

It’s as simple as that. Not easy. Simple.

Remove the self-imposed barriers between the current you and the ultimate you. Take away the “UNTIL”s that keep you here.

But then tell yourself and the world that you will do whatever it takes to achieve your dreams. Dreams that, I promise you, are closer than you think. Making part of your normal dialogue the improved and productive “UNTIL” will take you there.

So, stop using “UNTIL” to excuse yourself from the greatness that is inside of you- hard to bring out, but inside you nonetheless. And start using “UNTIL” to keep you working and grinding until you reach your goals.